We recently listed and secured a contract for 5138 N Claremont, Chicago IL 60625 in the Lincoln Square neighborhood after one week on the market.  The contract is expected to close before the end of the year. We listed the building for $849,900.

Take a look at more photos and listing information HERE

For sale: 5130 N Claremont Chicago IL 60625 asking $399,900. Our vacant corner lot listing (standard size 25' x 125') adjacent the south side of the building is available. Build your dream home near Winnemac Park and in the boundaries of 1+ rated Chappell and Amundsen school districts.   More info HERE

If you are interested in buying or selling small multi-unit buildings, houses or condos in and around Lincoln Square or other Chicago neighborhoods please contact us at erojas@kalerealty.com

Posted by Eric Rojas at 5:37 PM No comments:

I took my kids for a walk around Kenwood yesterday with a stop at #44's home for a photo. It dawned on me I've taken my two older kids around a couple times but the eight and five year olds had not been to the neighborhood. My eight year old Stanley likes "mansions" so it was high time he saw THESE mansions. They had fun.

I use to do much more business in Kenwood/ Hyde Park in the earlier 2000s. This was a product of working with more relocation clients and the sort of heated development market of 2005-2008. That said these days I still frequent the neighborhoods after trips to 31st Street Beach, kids' sports, visiting friends or on bicycle trips down the lakefront. After looking around today I wondered how Kenwood fared in this unique roller coaster of a real estate year.

Kenwood is less dense than many Chicago neighborhoods that reside close to the lakefront. Due to the extremely large parcels in the historic district (relative to the rest of the city) there are fewer single family homes. The price point varies greatly from the historic district homes south of 47th Street and the majority greystones packed a little tighter north of 47th Street. 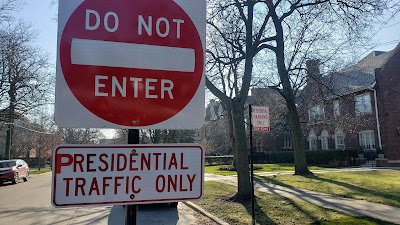 Posted by Eric Rojas at 4:26 PM No comments:


The Fifth-Third Bank property on the northwest corner of North Western Avenue and West Lawrence Avenue in Lincoln Square will be redeveloped with a grocery store tenant. Rumors I've heard were confirmed by a post this week from the 40th Ward Alderman's office. The zoning allows for the re-development of the property "as of right". There would be no need for the community approval or zoning process. The developer of the project has not disclosed the specific grocery store tenant that will lease the space.
Lincoln Square has become one of the most desirable neighborhoods in Chicago (if home sale numbers, restaurants, schools, new development and sale prices mean anything). But the high profile corner of Lawrence and Western still has a bit of a gritty underused feel. An old Walgreens with pigeon soiled plaza, a vacant Mattress Firm storefront, the over-sized drabby bank building and vacant adjacent commercial building... and parking lots.  In fact there is a Burger King with a large, barely used surface parking lot across the street from the bank parking lots.

A legitimate concern is the affect a large chain grocery store may have on local business.  Even with several grocery options within 4 to 6 blocks of this location I feel a quality grocer would not be detrimental to local stores. Harvest Time and Gene's Sausage Shop (closest, local owned shops) have specialty products and service that keep loyal patrons coming back. Tony's Fresh Market serves a large diverse area six blocks north. The Mariano's is six blocks straight east could be affected. However it is a large corporate chain in which most people I talk to feel the quality has gone down since it was purchased by Kroger.

Posted by Eric Rojas at 9:00 AM No comments:

One of my favorite areas for outdoor recreation is getting better. A new turf field with lighting and an improved "natural park" area are being developed in southern Lakeview. The lakefront parks and facilities between West Barry Ave and West Diversey Parkway are really pleasant. There is work-out equipment, gravel trails, a golf driving range, tennis courts, concessions and the harbor. 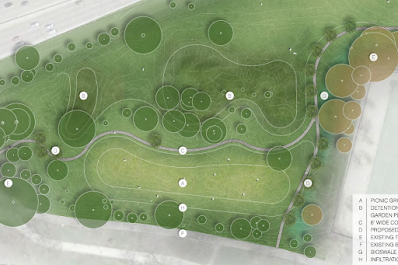 Of course the real estate along this strip of parkland and amenities is fantastic.  There is a mix vintage mid-rise and high-rise buildings overlooking the park. I took a look at sales west of North Sheridan to the lakefront and West Diversey to West Belmont. Attached condos have a relatively accessible median price of $245,000 over the last 12 months. Now, many of these are one bedroom condos with high assessments.  Over the same period the highest priced sale in these boundaries is $1,950,000 at 3030 North Lakeview Drive, Unit 202. Chicago IL 60657.
Posted by Eric Rojas at 12:51 PM No comments:

The laundromat building owner has put in a zoning change application and proposal with the 40th Ward. The redevelopment of the one story retail building would feature 12 residential units and ground floor retail. Here's a rendering of the project: 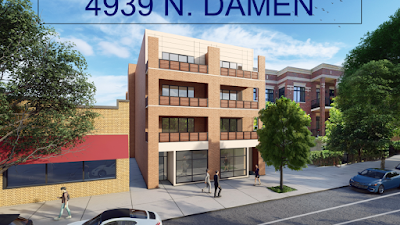 I would like to see this development happen. I'm all for more density along North Damen Avenue to support more business and services near Winnemac Park. We've seen one or two development projects a year from 4800 North Damen to 5200 North Damen over the past decade.
Posted by Eric Rojas at 2:31 PM No comments: 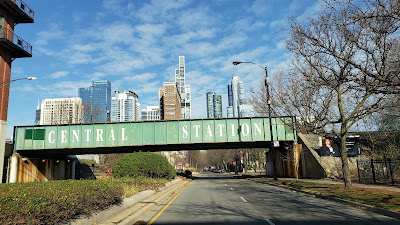 The South Loop neighborhood is full of great views, restaurants, shopping and parks.

Check out the video sneak peak walk through of our new

Pricing and information at erojas@kalerelaty.com

Posted by Eric Rojas at 1:45 PM No comments:

We're working with several buyers and sellers that are dealing with potential basement apartments. There was a lot of buzz early this year about the the introduction of a new Chicago Accessory Dwelling Unit (ADU) ordinance. Among other things it would make converting a basement to a legal apartment dwelling much easier. Here's an explanation of the ordinance introduced early spring. Foremost if your property is zoned RS3 or above you would not need a zoning change under the new ordinance to convert the basement to an apartment.

As it stands... Chicago awaits the new ordinance. A property owner still needs to apply for a zoning change to create a basement dwelling.  Luckily, the Chicago building code changes have "reduced" some requirements for a legal basement unit.  Mainly the ceiling height for living spaces has been lowered six inches to 7' from 7'6".  This is helpful now... the new ordinance may be helpful in the near future.