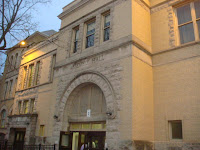 We've already had a lot of discussion since the community meeting surrounding Ravenswood Station, a planned development at Lawrence and Ravenswood.

Crossroads Development Partners picks totally wrong guy to present the development... think Ferris Bueller's teacher's voice, but the guy's a lawyer who doesn't know how to use a microphone. (The people already ticked off...) Say a couple quick words about the 11 story tower... move on to some other stuff (the people upset about those quick words on the 11 story tower).

I think we all like the row houses here, but when you see the renderings of the tower, it's depicted small in scale and only 9 stories vs. the 11 stories they want to build. 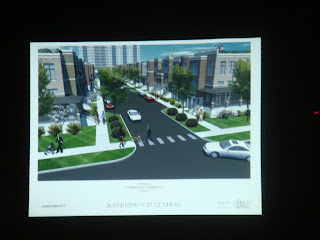 Bring in the 30 year retail grocer veteran who shows us a bunch of relatively lousy photos of what the "Roundy's" grocery store will look like... this went on way to long and made little sense.

I'm sure I'm not the only one who was thinking the store photos looked a little dark and shitty... it was a little bizarre. 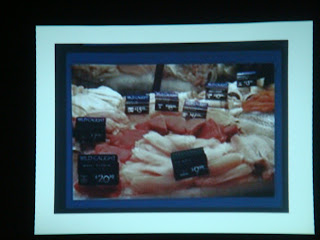 Bring up the Sears guy to talk about the renovation of the store... pleasant, the people like, doesn't go over too badly, nothing but good.

The people have their say... WTF is with that tower? Short notice on the community meeting for sure... Move the Metra train in front of my building? What about the traffic that will increase on Wolcott? Who will live in all those units? Trucks?

With the current information provided by the alderman and developers, this project stands as a big no for the majority of the community; NIMBY of not.


In all fairness, I'm for density around transportation hubs... but residents are not ready for the scale and unknowns of this tower. The residential is not slated to be built for several years (when the market picks up). I've also commented that the retail might need the density of a tower to exist, so no tower may mean no grocery store.

We all want a grocery store. I'd have to imagine a small meats and produce store along the lines of Olivia's in Bucktown, except with more staples and less gourmet, would do great on Damen... and we wouldn't need a tower to support it. You could also do something small like Andy's or Harvest Time in Albany Park... but more upscale in that lot with the row houses. I'm sure that would not make any money, but it would make a lot of sense.

The plan doesn't show the tower as 9 stories. It shows all 11.

You're not noticing that there is a two-story structure in front of it, and then 9 stories above that. Or looking from the north, it shows 9 stories above the two story level that has parking and presumably non-residential uses (utilities, perhaps storage...)

I take it most of the people who would be satisfied by a small grocery store like Olivia's are too uppity to try Garibaldi's, but frankly, we already have a small grocery with produce, a block and a half from the proposed Roundy's. If a few more people would wander in, buy a few apples and ask about spinach, I think they'd start expanding their selection.