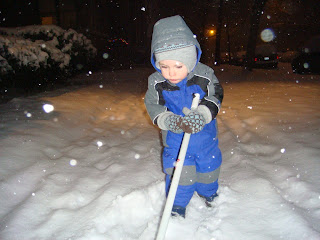 Chicago has about all the breathless drama possible with a President Elect press conference every hour and... well, you know... that guy from Ravenswood Manor.

Now the city decides to limit snow plowing side- streets this season. The one thing we could count on here in Chicago was snow removal since Mayor Michael Bilandic's most famous mishandling of the 1979 blizzard. It is said that it cost him the election that spring to Jane Byrne.

Last evening's horrendous commute times could simply be blamed on the timing of the snowfall during rush hour. But the perception is Da Mayor has arbitrarily cut back on plowing to save money rather than use other available funds for public safety. The timing is bad... declare a cut back on side streets, get the fourth snow accumulation before winter officially starts, and then angry slip sliding side-street residents give the Aldermen a soap box to grandstand on.

I do agree with Alderman Tom Allen on Chicago Tonight looking for TIF money and other resources to keep the public safe. You can all guess which event the stashed money is for. However, how about keeping some of these aforementioned issues in front of the City Council to really make a difference?

One slap in the face was the Mayor's attitude in his press conference when questioned on the snow removal issue today. It's unfortunate how "funny" the Mayor has gotten in his press conferences these last three years. I never remembered him so loony, sarcastic, arrogant, combative and sometimes bazaar before the Hired Truck scandal broke and really changed the Chicago political corruption landscape. Is there an adviser out there that can do some advising? "Hey Mayor, how bout you don't laugh at the questions so much eh'? Make the people feel like you care a lil' bit"

I totally agree, but all my anger disappeared when I saw that cute picture!

Keep up the good work...

The kid is 21 months... already in the snow working. Let's hope that's the case when he's 16 and hates his parents.