With all the attention on our good Governor my humble blog has experienced triple the hits; mostly for the a variety of search engine phrases dealing with Ravenswood Manor. I've been writing about the neighborhood for years.

The boundaries of the neighborhood are shown here. That's the Chicago River making up the eastern border. Montrose is 4400 north and Lawrence is 4800 north.

I think most people consider North Rockwell or North Western Avenue the eastern border when describing the Ravenswood Manor neighborhood. For this post, I'll use Rockwell at 2600 west on the Chicago grid.

We are basically looking at a 4-5 block radius that is dominated by single family homes on leafy lots. There is a good dose of two and three flats. Few large multi unit buildings call Ravenswood Manor home.

2 homes are currently under contract and pending. One house under contract on the low end at $450,000 is a half block from the Governor's house. The average sale price for a single family home in the neighborhood is about $800,000 with homes on the Chicago River receiving a premium.
It remains to be seen if all the national and international attention on the neighborhood will bring more interested buyers. 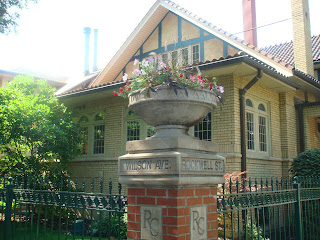 This home shown here is located at the "gate" of Ravenswood Manor. It's a good example of the gorgeous brick bungalows with beautiful tile roofs that dot the landscape.

Hi. FYI - The Manor ends at the river. East of that is Ravenswood Gardens. Not sure if that ends at Rockwell but I think so. At some point it is Lincoln Square. And as you may know (and I did not when moving in to Ravenswood Manor a ways back) it is actually in Albany Park. Most of the news coverage of the Gov's house said it was in Ravenswood. Lincoln Square is. The ward changes somewhere around there, too. We have Mell and Lincoln Square has Schulter.
Just saw Rod and Patty are looking to sell. They bought at around $500,00 (forget when) and are listed at over $900,00. Prices here are better than many areas but lower than they were. Who knows if he will get it or not. It is now an infamous house but we all know it has cash strapped owners.

I know, I know. But for the purpose of the blog audience it may get tedious breaking up the very small areas of Ravenswood Manor, Garden etc... when introducing the general area. When representing buyers in actual purchases there is definitely the need to make distinctions.

Thanks for the tips. I thought I might get the listing on their house:-)
The stigma question raises a good point. Unless really top of the line inside and a 35ft plus lot, $900K may be pushing it on that corner facing Sacramento. I'd have to check the lot size; never researched the house.

I tried to by a foreclosure condo on Sacramento and Montrose.... lost in the bidding. We drove around the block three times checking out comps etc... and my partner thought Rod's security detail would pull us over for looking suspicious!