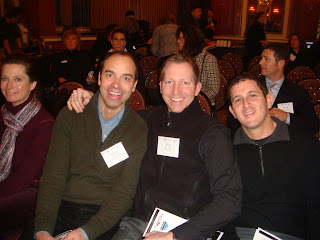 I attended the 2009 Regional Economic Forecast and the renovated Palmer House Hilton last Thursday evening despite the sub-zeroness (and I don't mean the refrigerator brand). This is one of my favorite seminars each year. The networking is terrific and I always see some great Realtors and industry people I've done business with or have exchanged ideas.

The Palmer House Hilton is just gorgeous... Quite a transformation from the gritty Wabash with the L trains and street bustle to an elegant, loungey, yet majestic environs. Ever since reading "The Devil in the White City", I can't help but imagine the scene here was very similar at the turn of the century. The cocktails and hors d'oeuvres didn't hurt either.

I don't have two hours to write this, so here's several highlights I gleamed from the four very comprehensive speakers:

1. From the academic perspective, jobs are the key to this recovery. Stimulus would be well directed to job creation.

2. Recessions in the past have sometimes seen an increase in home buying such as in 2001-2004. Interest rates were a factor during these times.

3. There is, on average, a 5 month lag to large scale economic stimulus such as the current interest rate drops. We are not yet seeing the full effect of the 5% interest rates as people take time to get interested and then shop for a home after responding to the stimulus. 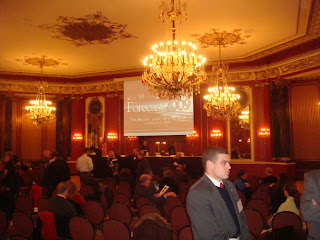 4. Downtown development has stopped. Only a few large scale developments are scheduled to deliver in 2010-2112.

5. Middle America has been stable as far as home prices. Charts showed the roller coaster ride of the east and west coast, Arizona, Florida, Nevada etc... but places like Lexington Kentucky, Chicago, Houston, Nashville, Denver all resemble a slow increase in median home prices on a steady climb and a much smaller pull back (if any in some districts of those cities).

7. Recovery of housing sales and decreased inventory will be seen at the lower end properties first.

8. People flock to quality product and location in down markets. Some downtown buildings have shown increased sales even in the downturn... suggesting demand for quality.

10. The 2016 Olympics would be a boon for the construction industry and anyone who could rent their home out for two weeks! 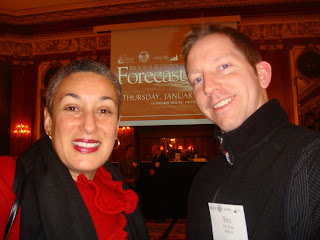 Top Producer Michelle Brown of Rubloff somehow doesn't run away from me!