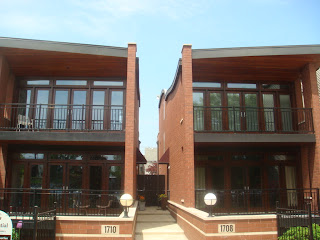 One of my favorite homes sold recently in the Andersonville/Ravenswood neighborhood near Ashland and Winnemac. In fact, it was the subject of the great Dennis Rodkin and Bob Sirot on WGN's Noon Show (at, uh... noon today). They were gracious enough to point out the edge of the Earth out here at Foster and Clark has a little something going on.

We wrote about this home in June when it was listed at $999,900. The home recently closed at $850K. This is a terrific modern home that sold for a loss. At 13% below it's 2007 closed price, not a total disaster and I'd venture to say an everyday occurrence. The media picked up on this because one of it's own, ABC's Kevin Roy, sold the house. I featured the home on my Ravenswood Open House Bike Tour this summer and I think I ran into Mr. Roy, who, was apparently hosting the open house and watering plants. The house was full of contemporary furniture and art. Just light filled cool space with appropriate decor. Below is a photo of one of my favorite rooms on the top floor leading to the rear terrace. This would be MY room should have the Rojas clan knocked off a bank and bought the house. 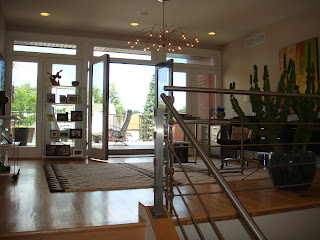 $850K was a pretty good deal. There have been plenty of traditional frame homes selling for more in the area recently. However, the lot is a little tight (the lots of the twin homes are basically "connected") and the south facing view is of a parking lot. But, my money is on this open, modern design that catches the eye of neighbors and passersby (like the media) alike.

I live in the 'hood too and this house reminds me of some of the homes I saw in the hills around the Rose Bowl in Pasadena.

I went to an open house there too and i found the home to be cold, dark and lacking character. Certainly did not have a 'homey' feeling to it. It'll be interesting to see what the new owners to do it.

Sorry Anonymous...plenty of traditional newer construction homes right in the 4 block radius you can buy... for more money too. One such house just sold around $925K at Winchester and Winnemac (and it sits basically against a three story condo building on its South). That traditional style house had a 150 ft lot however. If you're an owner in the hood, you should hope for a higher sale price...yikes indeed.

This was a pretty good deal, especially if in mint condition. The home has south exposure and a really bright lofty room on the north side top floor. The outdorr spaces flow really well off the interior living spaces... a nod to your california reference and West Coast mid-century design.

I get you may not like the style of the home, but there is a whole other contingent out there (including me) that would prefer a house like this rather than the American Four Squares, Arts and Crafts and bungalows that dominate the area.

See you at Winnemac Park!